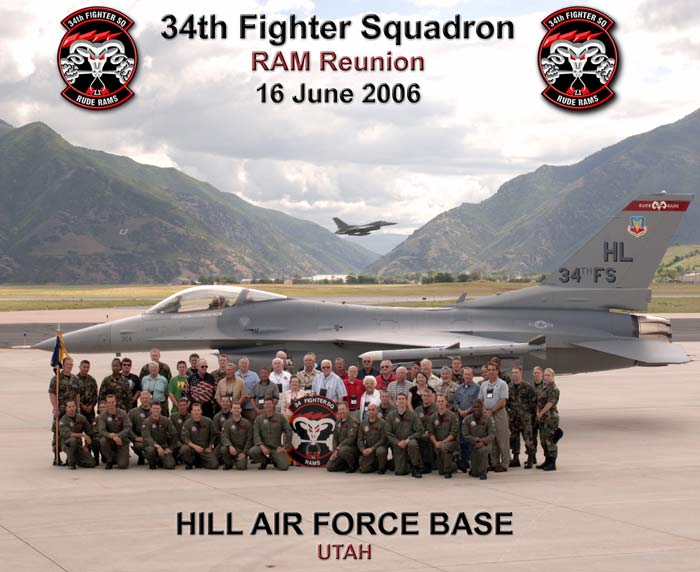 At the Saturday night banquet, the "Thud guys" presented a replica 100 missions-completed scarf to the squadron.
They will make it an integral part of their heritage collection.
The presentation speech is quoted below.

Story of the 100 Mission Scarf

"The 34th Squadron has a proud heritage dating back to World War II. Each generation has passed on in some manner a little of the history that was theirs. During the Vietnam War, the squadron was based at Korat Royal Thai Air Base and flew combat missions over North Vietnam and Laos to support the attainment of our nation’s goals. The 34th was equipped with the F-105 from early 1966 through September of 1968. The assigned tour for aircrews was one year or 100 combat missions over North Vietnam, whichever came first. The 100 missions in minimum time was a great incentive for the pilots and most finished 100 missions in six to eight months."

"The 34th had a unique tradition to celebrate the completion of the Magic100 missions. Upon return to base, most were likely to make a high-speed flyby and do a couple of rolls before landing. After the landing roll out and exit from the runway, the pilot deployed his “basket” refueling probe and was met by an escort of fire trucks and follow-me vehicles that ignited colorful flares while accompanying him to the parking spot. There awaited a party of greeters that could include the wing & squadron commanders; however, the most important greeter was a beautiful Thai waitress from the officers club who gave you a pineapple and draped the 100 missions scarf around your neck. The hollowed-out pineapple was filled with an exotic liquid that would constitute your drink for the rest of the day/night. You were then carted off and unceremoniously tossed into the swimming pool with the scarf. The celebration would continue at the officers club. When you entered the O’club you were obligated to ring the brass bell to declare that drinks for the bar patrons were on you."

"Before the 34th transitioned to F-4s, 101 pilots had made it through 100 combat missions over North Vietnam in the beloved “THUD”. The scarf was returned to the states and presented to the Air Force Museum at Wright Patterson AFB. It is to become an integral part of a Southeast Asia display at the museum. It is very fragile after some forty years and many dunks into the swimming pool. A museum curator displayed the scarf, under glass, at our reunion banquet at Wright Patterson AFB in 2005. Segmented pictures were taken to capture all the names on the scarf. A search was then made to locate all the pilots whose names were on the scarf. Sixteen were confirmed deceased and another 16 could not be found."

"We Thud Drivers feel very honored that the present generation of Rams has paid homage to our generation by the display of historical items from our Korat days. Therefore, we had the replica scarf made to present to the squadron as a token of our appreciation for hosting us for a great reunion at Hill AFB June 16-18, 2006."
Reunion 2005
Reunion 2007