Thud pilots who flew their war out of Korat, Thailand, will remember Roscoe. In fact, most anyone who did his Southeast Asia tour at Korat will remember the sandy colored mongrel who had the run of the place.

Roscoe is the dog that a whole wing adopted. Or maybe it was the other way around.

Surprisingly, not many people know the "true" story of Roscoe. I don't either, so I will tell you what I was able to piece together from newspapers and talking with people who were at Korat when Roscoe arrived.

Roscoe's origin is uncertain. What is known is that in June 1966 Roscoe came to Korat from Yokota AB, Japan. He came with his owner, Maj. Merrill Ray Lewis, when the F-105s came to Korat to form the 34th Tactical Fighter Squadron. Major Lewis was shot down two months later over the Northeast Railroad and as of September 1973 - he was MIA.

Roscoe was named after Capt. Roscoe Anderson, an F-86 pilot, a MIG killer in Korea, and a friend of Major Lewis's. When Captain Anderson was killed in an F-105 landing accident at Yokota, Major Lewis named the dog in his memory.

Some people say Roscoe came from Korat City, others say he is a Japanese dog, still others say he is American. The veterinarian states that based on medical history and physical characteristics Roscoe is not a Thai dog.

Some people say Roscoe came to Korat in the back seat of an F-105, however, Thud pilots who were at Korat at the time say that the F-105s then did not have a back seat [but the 36th TFS at Yokota did have a few 'Fs - RV].

When his owner did not return, Roscoe nearly died of a broken heart. He wouldn't eat, he just moped around waiting for Major Lewis. Someone finally started taking care of Roscoe and got him to eat. He was adopted by the whole 34th TFS. Years later, when the 34th changed from F-105s to F-4s, Roscoe stayed with the squadron. Paperwork was submitted and Roscoe became the only official mascot of the 388th Tactical Fighter Wing.

Since Roscoe is the only mascot allowed at Korat he is entitled to special treatment. Roscoe has the rank of colonel and as such he has free run of the whole base including the Officers Club, rides in government vehicles, and has access to the operations complex known as "Fort Apache". Roscoe used to attend regularly the wing commander's morning stand-up meeting. He was privileged to sit in the wing commander's chair. During the war over North Vietnam, aircrews could count on Roscoe being at the briefing. If Roscoe was asleep or bored with the briefing, the mission would be easy; if he sat up and was alert, the pilots braced for a risky one.

Roscoe has effective ways of getting rides around base. He just walks up to a vehicle when the driver is getting in, or he stands by the side of the road until someone stops for him. When he gets where he wants to go, Roscoe informs the driver who then stops and lets him out. Roscoe used to ride in the back of trucks, but not anymore, he rides up front on a better seat.

People have had doubts as to how long Roscoe would live since he has had heartworms. However, due to the skill of the Air Force veterinarians at Korat, Roscoe survived two attacks. In May 1973 Roscoe underwent IRAN (Inspection and Repair As Necessary) and came out with a clean bill of health. However, like many older Americans Roscoe was overweight.

There's even a Roscoe control officer - currently, me. There has to be someone to make sure he remains a Code One dog.

After all, Roscoe is the dog a whole wing adopted, or vice versa.

Roscoe was cared for by all, but especially by the 34th TFS, including Squadron Commander, LtCol Bob Smith (late 1967 to mid-1968).

Roscoe died of a heart attack at one of his favorite spots, the Korat Officer's Club, on September 13, 1975.

Jan Lewis found a story about Roscoe's departure and forwarded it to Dave McNeil. Thanks to both for adding to the Roscoe legend.

Click the image at right to read the story. 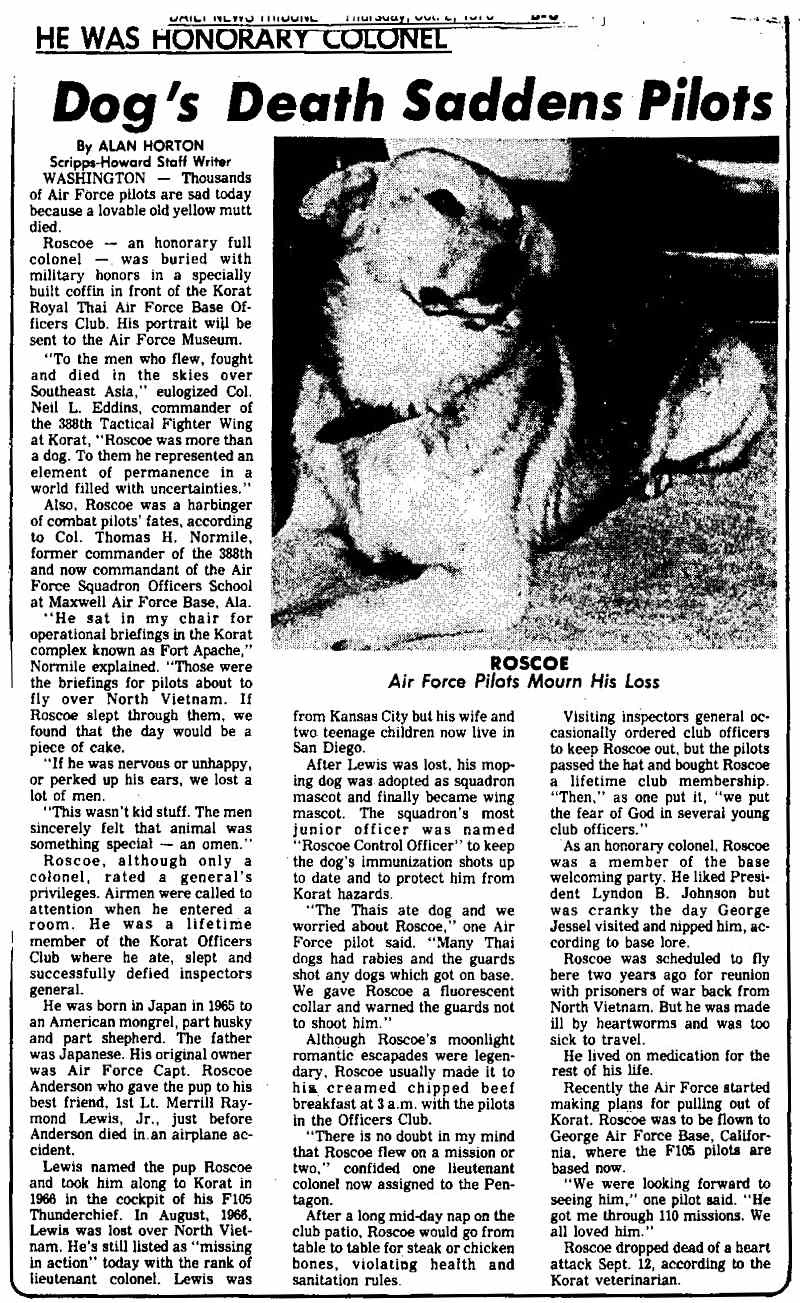 Roscoe was legendary at Korat. Click any picture for a larger image.

Check the following links for more stories and pictures.

A Story of Roscoe
And Still Another Roscoe Site
In Praise of The Squadron Dog (Vintage Wings of Canada)
Bob Freitas's site has much of this same information plus some comments.
Update, May 3, 2009: Tamara Lewis Kolstad, Ray's daughter, sent us a nice note with the "real" story. Here's what she says about the early days:
We got Roscoe as a puppy in Japan from some friends of my dad's on Johnson AFB. At the time, we were told he was a combination of German Shepherd, Alaskian Huskey, Samoyed, Wolf and Pekinese. After a couple years, Daddy took him over to Korat in a C-130 close to the day my mother, brother and I were sent home to the states. Almost immediately upon our arrival in the states we were given the news of my father's MIA status. My Mother was asked if we wanted Roscoe shipped to us, but under the circumstances, and we knew how Roscoe would want to be with Ray if he was ever found, we chose to leave him in Korat where he was made the mascot. Don't get me wrong, we loved that dog so much, but we knew he would be sad at the loss of Ray and that he would have a better life at the base.
Tamara

Thank you Tamara for giving us the "rest of the story".

Update, July 3, 2009: Jan Lewis has found some early Roscoe pictures and graciously shared the four below with us via Dave McNeil. (Click on any picture for a larger image.)
River Rats
Honor Roll