The 2010 reunion was a huge success!! Ken herded us into the Historic Stockyards of Fort Worth like a well seasoned drover. What else would you expect from a guy who owns a ranch in Texas? 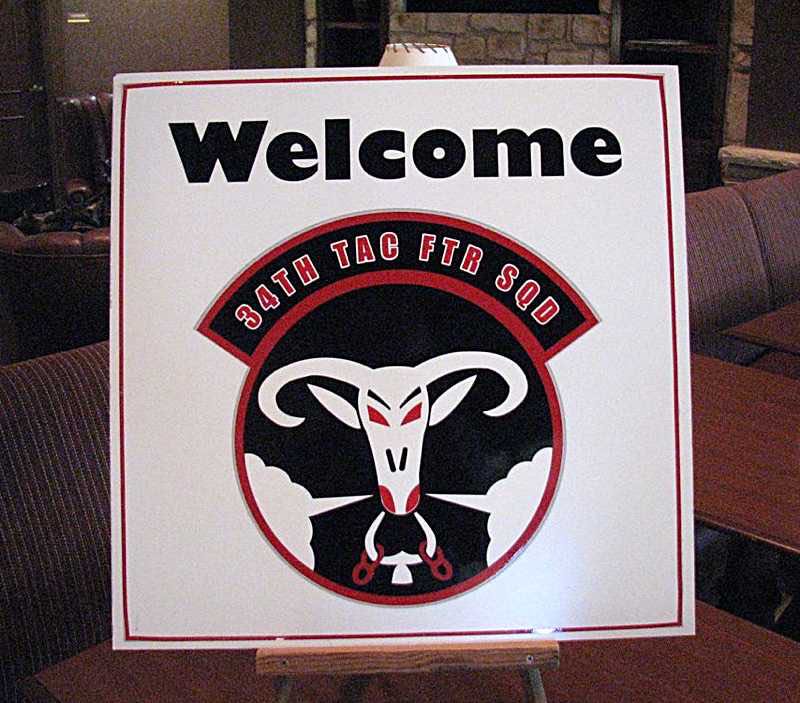 Tuesday, May 4
Ken and Jake warmly welcomed and in-processed everyone in the hotel lobby on Tuesday. Howard, Jake and others set up a terrific display of 34th history and memorabilia in the hospitality room. Members congregated in and out of the room that day, getting acquainted and re-acquainted, having refreshments and talking over old times at Korat. That night, many went to Riscky’s in the Stockyards district to partake of some mighty fine Texas barbeque washed down by some good old Texas suds. 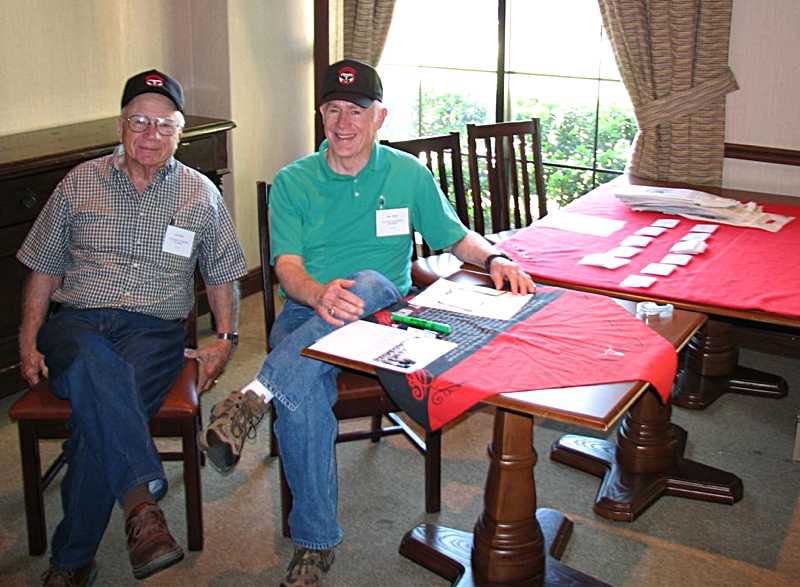 Wednesday
Early Wednesday morning, the group boarded a bus for the Lockheed Martin tour of the F-35 production facilities. Following a superb, indoor slide presentation and briefing by our host, Joel Malone of Lockheed Martin (retired F-16 pilot), we were given a fascinating tour of the plant. Clearly, fighter production today is a wonder to behold. Joel completed the tour with a visit to a hanger where we had the privilege of closely examining an Air Force variant of the F-35, soon to be delivered to the first base. The Company was gracious enough to take group and individual shots and provide us with personal copies. Lunch was had at the very nice Lockheed Martin cafeteria.

Dining at Billy Bob's.That night, we dined in private at Billy Bob’s in the Stockyards District, attributed to be the world’s largest Honky-tonk. Ken hosted the formalities and recognized family members of deceased squadron mates. It was a true honor to have Steve Falls, son of Clyde Falls, and Sandi Allen, wife of Ben Allen. After the meal, the guest speaker was a Historic Stockyards tour guide who gave us an interesting talk on the history of Fort Worth, the stockyards, cattle drives in the 1800s and the Chisholm Trail. 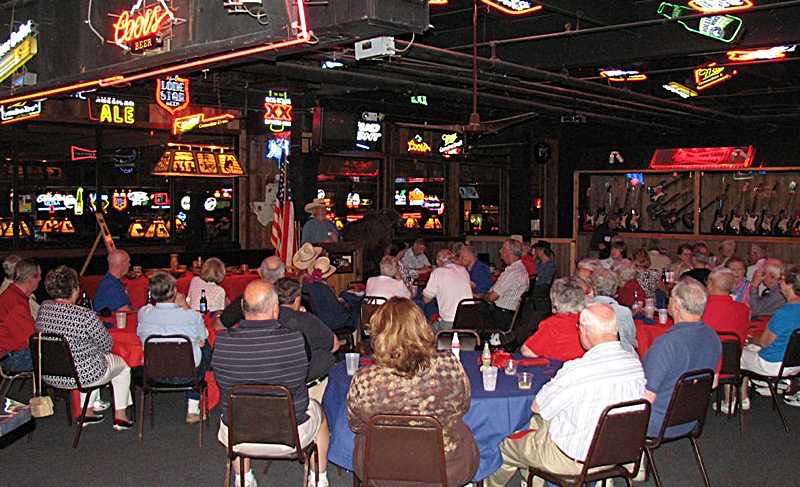 After the meal, the guest speaker was a Historic Stockyards tour guide who gave us an interesting talk on the history of Fort Worth, the stockyards, cattle drives in the 1800s and the Chisholm Trail. Afterwards, Ken presented each guy with a hand turned, wooden bowl he made from the wood he collects on his ranch. This was an extraordinary gift of labor and love and most appreciated by the guys and gals. Later, the guys presented Ken with a gift certificate to show their genuine gratitude for all the work he put in to planning and executing this super reunion and past ones. Ken then asked the group when we should have the next reunion and would anyone be willing to take the reins. Discussion to follow the next night.

Thursday
Thursday morning, the group took another bus to tour the new Dallas Cowboys stadium. Every person came back amazed at what they had seen, feeling it was one of the best tours they have ever attended. Our tour guide was a retired Navy fighter pilot. His background added a lot to the tour. There are no cheap seats in this venue. We toured the multi-thousand dollar suite to the standing room only area. Nothing was spared in the decorating scheme – imported tile and marble to crystal chandeliers along with a high dollar art display. We were taken through the Cowboys and Dallas Cheerleaders dressing rooms, which had beautiful cabinetry. From the Cowboys dressing room we took the walk out on the field. What a sight to see! Once on the field, one appreciates the size of the venue. We were very lucky as the giant TV screen was playing. What a screen. A great tour and everyone who went got back on the bus saying WOW! (Check the Stadium Page for pictures.)

The daily longhorn cattle drive in front of the hotel.In the afternoons of both main days, many of the group walked throughout the Stockyards district, watching the daily longhorn cattle drives, visiting the numerous interesting shops, the Livestock Exchange, the rodeo Coliseum, the Cowboy Hall of Fame, and various historic sights. Some went to Fort Worth to the art museums. 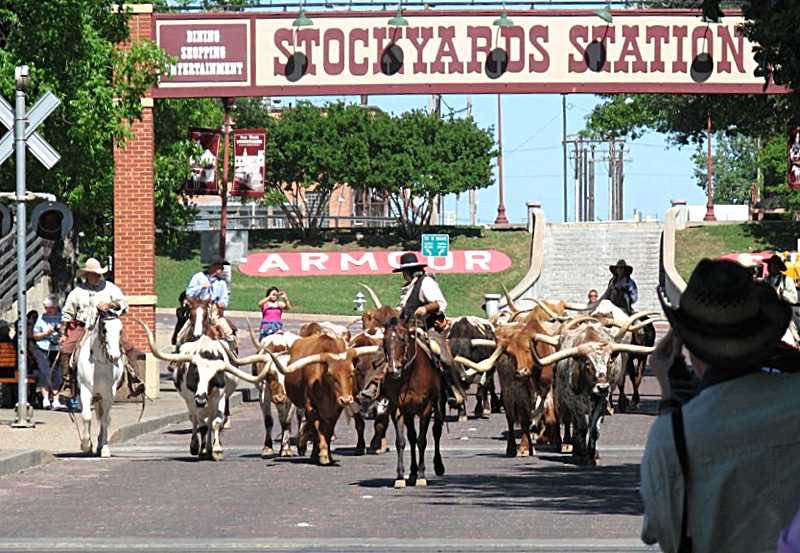 Thursday Evening
Thursday evening, we dined outside in a beautiful garden setting at the spacious Mexican restaurant - Joe T. Garcia’s - where the home style meal provided endless platters of every Mexican dish conceivable and where margaritas were readily at hand. Irv LeVine, in the splendor of his well preserved and remarkably well fitting party flight suit, entertained us with song and guitar in a fashion reminiscent of the old days at the Kaboom Club; he hasn’t changed a bit and his voice is as good as ever. As we reconvened back in the hotel lobby, Irv had us all singing very familiar fighter pilot songs. Ken finally put the press on the group, asking one more time who would host the next reunion. Vern Ellis bravely rose to the occasion to take on the mission. You’re a good man, Vern.

The evening concluded with a hearty round of handshakes, hugs and farewells as everyone turned in to prepare for a Friday departure. The reunion was, for certain, a special time for all with deep meaning. Some had not seen each other for 42 years, not being sure they ever would have. As Ken said, we need to keep this thing going.
Back to Reunion 2010
On to Pictures
The Stadium Tour

Remember – May, 2012 at Colorado Springs. Let’s find as many guys as we can and get them there with their wives, too, who add a really nice touch and keep us old fighter pilots in line. It promises to be another great time.