In an attempt to meet the success of the Navy's A-6 aircraft with their superior radar, the Air Force developed a training program for twenty-five F-105 pilots, which would qualify them to fly all-weather combat missions in North Vietnam. The missions would be flown by the 388 TFW.

The program was originally called "Project Northscope", then "Operation Commando Probe" and finally "Commando Nail". Initial crews, however, referred to the program as "Ryan's Raiders". Under project "Northscope", technicians modified four F-105F aircraft. The first ten students were instructor pilots assigned who had previously volunteered for SEA duty. These pilots completed the training on March 17, 1967, in time to serve as the front seat pilots for eight F-105 replacement strike pilots that had been diverted from their assignments to Korat and Takhli in Thailand.

Nick Donelson was in the initial group and the following is his account.

I deployed with Peter Pittman, Don Heiliger, and Dave Burney to Korat in April 1967 in F-105Fs from the 35th TFS at Yokota. Heiliger and Burney were from the 80th TFS. We were the first deployment of Ryan's Raiders to Korat. Major Ralph Kuster was designated the Squadron Commander of the RR's by Colonel Chairsell, the 388th TFW Commander.

Peter Pitman and Bob Stewart didn't return from a Ryan Raider Mission to Pack 1 or 2 shortly after we arrived and I have never heard if their crash site was ever found.

After 16 Ryan Raider Missions I went to day strike in the 34th TFS and finished my 100 Missions (Al Nelson was finishing up and George Clausen became the Squadron Commander).

Dave Forgan was the Back Seater and finished his 100th in the 469th. Peter Pitman and I had deployed earlier TDY to Takhli in 1966, 354 TFS, to fill in until some PCS pilots arrived.

Donald Heiliger was the pilot and Major Ben Pollard the "GIB" when they were shot down on May 15, 1967. They were flying as part of "Ryan's Raiders" out of Korat.

They were flying a night low level bombing run on railroad marshalling yards 30 miles northeast of Hanoi. Either small arms or light AAA set the plane afire. They ejected safely. Heiliger received minimum rib and leg injuries when his parachute caught in a tree. Pollard received many cuts and bruises, and initially was paralyzed from the waist down from back injuries. They were both taken prisoner separately, but met on the way to Hanoi.

Donald Heiliger was released on February 18, 1973, and Pollard on March 4th. 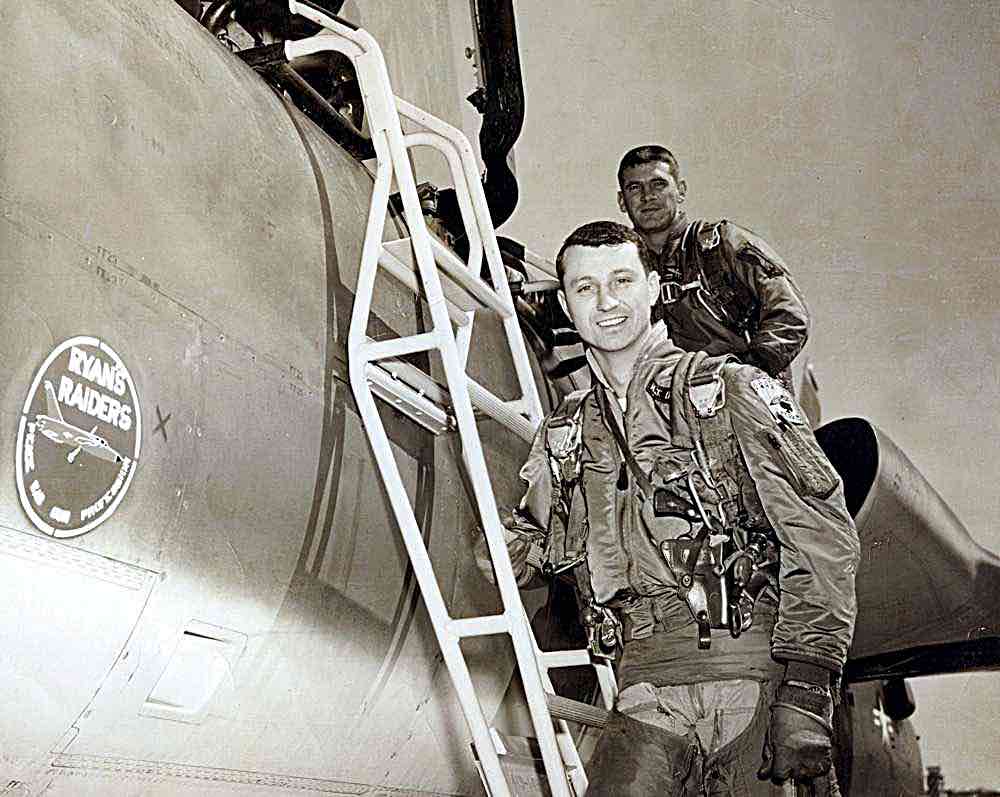 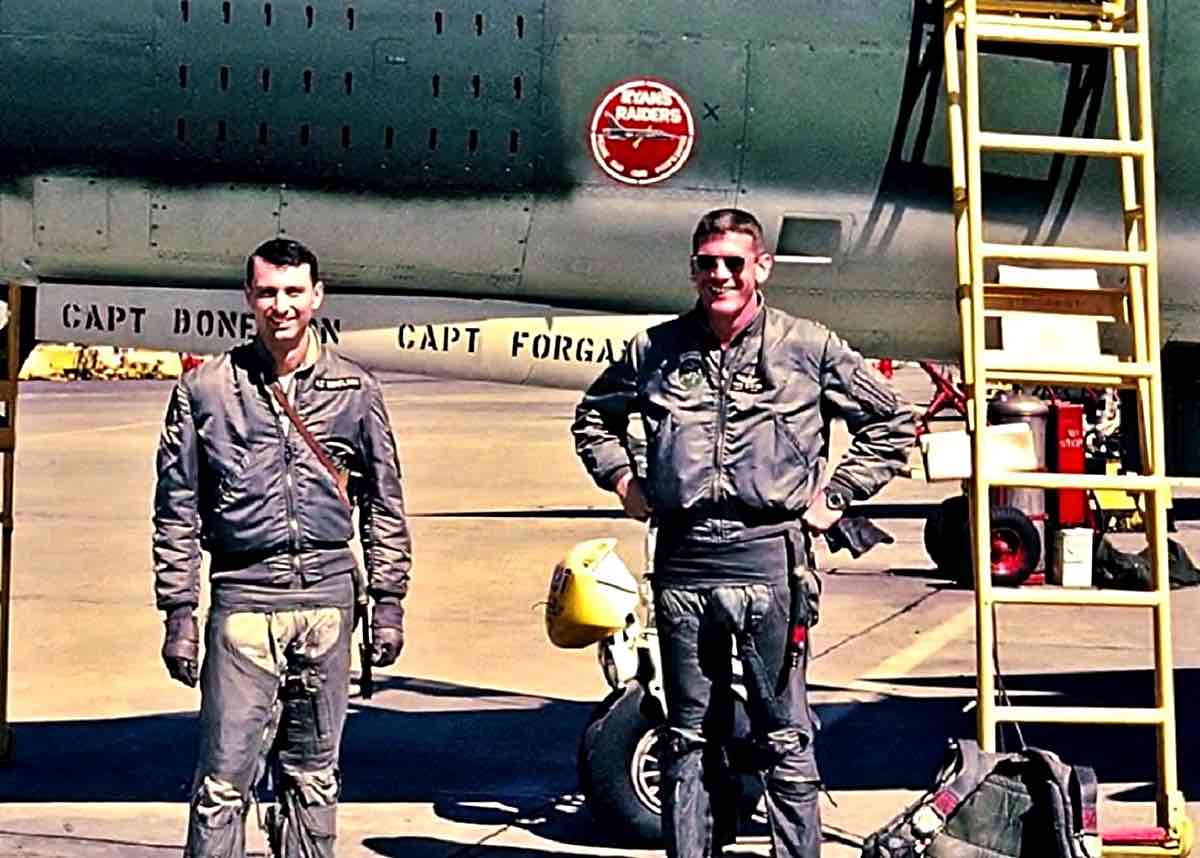 Nick and David ready to go. 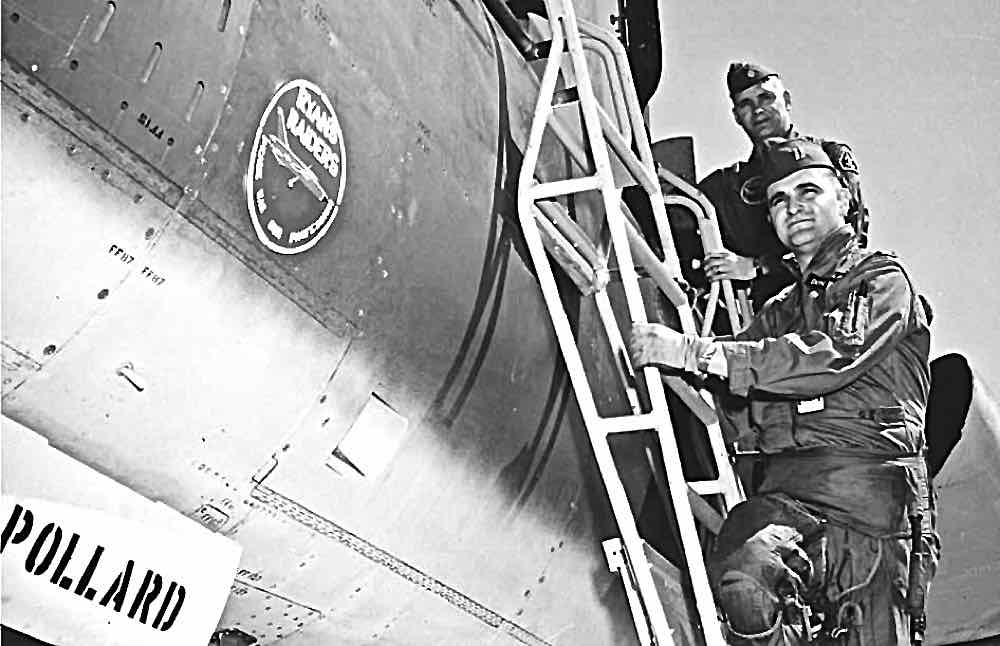 Don Heiliger and Ben Pollard both did oral histories that give more background information on how the Ryan's Raiders concept evolved.
Their interviews are available via the buttons below.

Heiliger Oral History - pdf
Pollard Oral History - pdf
Nick Donelson has produced the video at the right showing the initial Ryan's Raider deployment. While the resolution is not great on the full screen it still has some very nice color pictures.

Captain Peter Potter Pitman was shot down on May 12, 1967, listed as missing, and later declared killed in action.

In November 2018 a Waynesville, North Carolina newspaper, The Mountaineer, interviewed Peter’s widow, Libby, and published a story about their years together: Life After Tragedy. If the newspaper link does not work a printable copy is available via the button below.

The 388 TFW history for the period October through December 1967 described the technical and operational problems encountered by the Raiders.

"Several difficulties, some of which are not yet resolved, have complicated the operation of the Raiders. Chief among these was the challenge of electronics. Modifications were made to the R-14 radar. An expanded scope now provides an improved presentation. A fast sweep in the center of the scope allows the operation to have a fast constant paint of the target. New test equipment obtained from Yokota AFB have greatly improved the terrain avoidance and contour mapping capabilities. Still to come are replacement of the rear seat scope by a Cathode Ray Tube and the addition of a radar absolute altimeter. Daily improvements reflect the success of the efforts of our Armament and Electronics Squadron and our maintenance in general. Other difficulties encountered include incomplete maps and charts of North Vietnam, (a problem partly resolved by radar photography of these areas), and lack of experience in Raider operations and techniques, which necessitated exchange or information with the A-6 Intruder pilots of the Bonhomme Richard. Daily crew meetings under the inspiring leadership of Major Ralph L. Kuster, his knowledge and experience in the airplane, and devotion to duty, have been most successful in advancing the Raider program.”
Links
Honor Roll